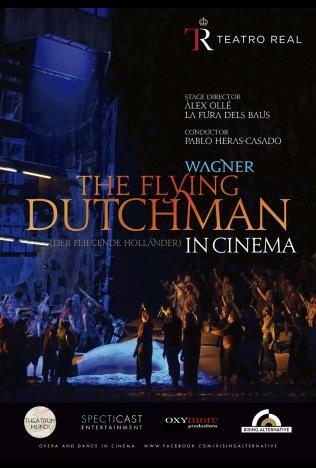 Der Fliegende Hollander(2020)
Richard Wagner’s Der Fliegende Höllander (The Flying Dutchman) is a masterpiece of the Romantic era, a gripping exploration love, death, purity and damnation. In this production by Alex Ollé (La Fura dels Baus), the conflict between good and evil is a reflection of a tormented and imprisoned soul.

The Dutchman, condemned to sail across an infinite ocean until the end of time, desires only to be released from his doomed vessel and return to a life on land. The sea, infinite and transcendent, becomes a powerful metaphor for the ultimate limits imposed on man.

In Richard Wagner’s autobiography, the composer wrote that his inspiration for Der Fliegende Holländer first struck during a sea voyage with his wife, traveling from Riga to London. A work full of symbolism, its central theme is redemption through a woman's love: in young Senta's pledge of faith, the sea captain recognizes his salvation. For her part, Senta abandons herself to a destiny with the nameless specter.

Based on an ancient legend and reinterpreted by poet Heinrich Heine, this libretto expresses the tragic nature of the romantic spirit. The Dutchman is damned, condemned to sail forever. The opera has an intense, mirror-like quality to its score, possessing all of the ingredients of what was to come with Wagner's mature artistry.